I must have been about 8 when I learnt to ride a bike, Mum and Dad bought Charlotte (my sister) and me bikes for Christmas one year. I remember waking up in the middle of the night thinking that the handle bars were Rudolf in my bedroom! Apparently I rode up and down the road until I’d mastered it. A few years later all three of us were bought racer bikes for our birthdays, we went to the bike shop with Dad and cycled them home. It was so exciting…until I landed on the cross bar on my lady bits at a set of traffic lights – oh the pain, one lesson on the bike I will never forget and never do again!
I have always had a bike since then, I had a red Giant at Welbeck College which followed me to university. There I learned to ride a bike whilst drunk, although I wasn’t very good at it as I would fall off continuously on the way home from the college club and wake up the next morning covered in bruises. That red bike served me well and I can’t actually remember where it ended up. It wasn’t until I met Andy that I tried mountain biking, we met in Northern Ireland and used to head out to the Mourne Mountains to go biking, Andy would take the seat off my bike so I couldn’t sit down to make me get used to having my weight back going downhill – it is tough love in our house! I bought my first mountain bike from the Edinburgh Bike Co-op, this was actually the first bike I ever bought myself and probably the real start of my love of two wheels. Andy was living in Edinburgh at this point and I was posted in Ripon, I spent most weekends driving north and we would go mountain biking at Glentress, when The Hub was there before Glentress Peel happened. It was brilliant, I loved the hard work of riding to the top of the hill and the exhilaration of the downhill the reward for the hard work. 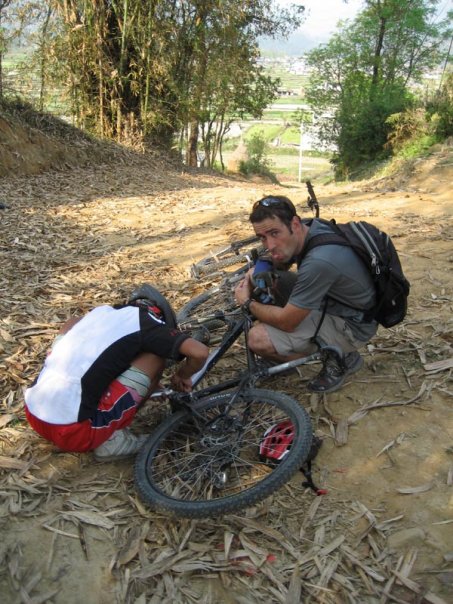 When Andy and I went to live and work in Nepal one of the first things we did was hunt out a bike shop, it was called Epic Mountain Bike and was brilliant. We both bought bikes, mine was 2nd hand the owners old bike, a Giant, this was in 2007, I am still riding it now! Every morning before work we would ride out to the Kathmandu Valley rim and back, at the weekends we would explore further and often head up to Kakani. We explored Pokhara on our bikes and one weekend I had my first experience of spending hours and hours and hours on a bike; we headed out of Kathmandu towards the Langtang valley. This involved some up but lots of lovely downhill once we had hade it over the valley rim, we stopped for the night in a place called Bidur. The next day we had to do all the climbing that we had merrily free wheeled down the day before – agony, my legs and my sit bones – oh I was so saddle sore! The only thing that made it better was amusing myself and seeing all the buses winding downhill with vomit running down the sides…at least I was in the fresh air and not cooped up in a bus travel sick!!!

Harris challenged me to 'get air' this year.
Family hill days are the best sort of days😁
Oooooo you could spot me from the moon today😁🤣
That was worth the early alarm😊🤘
Crofting with my team🤩
Running up into the clouds - it's not always about the view!